Over the last two weeks my colleague Tom and I have been in Brighton and Manchester for the Labour and Conservative conferences, picking up the mood and trends and engaging in the debate (drawing on our own Grant Thornton Blueprint for Vibrant Economy).

I came down with a cold at the Labour conference and went to Conservative conference with a residual cough.  On Monday I accidentally bumped into Theresa May in a corridor (I was looking at my phone rather than looking at where I was walking).  I am now haunted by a phrase from Jeremy Corbyn’s speech in Brighton:  ‘This conference is infectious; let’s make sure the whole country is infected with the same thing’.

Before someone hands me a P45, here are my three take-outs:  the three big themes that will shape the business environment over the coming months.

Last year the Conservative Conference was a confident, buzzing place with a pronounced focus on looking at new economic and social policies that could create a positive vision of Britain outside the EU; at the Labour conference there was little business presence and a sharp divide between the separate grass roots Momentum events and the main hall.  Opinion polls showed Theresa May had record levels of popularity for a political leader whilst Jeremy Corbyn’s appeal did not seem to extend beyond his core supporters.

Fast forward a year.  Labour had a buoyant conference, where it seemed that the party as a whole has embraced Jeremy Corbyn and grassroots members took over the main hall. Despite losing the election there were no recriminations or soul searching and the leadership sketched out policies that go beyond their recent election manifesto. The Conservative conference was, in contrast, an introspective affair, reflecting on the lessons of the election, lacking big ideas, and distracted by divisive debate about the leadership.

The reversal of fortunes shows the volatility inherent in current politics – where nothing is predictable.  Theresa May could lead the government for the next five years or she could be gone by the time you finish reading this.  Jeremy Corbyn could lead Labour to victory in another snap election in the next year or his momentum could dwindle as he waits out another five years for an election and Brexit divisions come to the fore in his party too. We just don’t know.  That means being prepared for political change that affects your organisation, with regulatory and policy change.

At the moment this volatility may create a rather perverse impact on the business environment:  all this uncertainty is actually creating stasis in government.  There may be big tectonic political pressures building up but for the time being this creates inertia rather than change.  Many people I spoke to at the Conservative party conference felt that the government was ‘treading water’, delaying big policies and leadership decisions until the Brexit negotiations are complete.  This reflects practical realities:  there is little capacity to do anything other than Brexit due to the all-encompassing workload Brexit creates in the government machine, and the limited ability to pass any other legislation due to the government’s lack of a parliamentary majority. It also reflects the fact that few, if any, political leaders really want to be responsible for leading Brexit; better to leave this to the current prime minister and then pick up the pieces afterwards.

Brexit is central to current politics.  The split between soft and hard Brexit runs down the middle of the Conservative Party.  The same split exists in the Labour party, where it is more a divide between Jeremy Corbyn’s euro-scepticism and the Europhilia of much of the rest of the party.  For these reasons there was no real debate about Brexit at either party conference and no new detail on the Brexit negotiations.

Perhaps most notable were the two points of agreement between the Prime Minister and the Labour leader:  both made strong statements about their desire for EU citizens working and living in the UK to continue to be able to do so; and both support a transition period of around two years (from March 2019).  It should also be noted that Theresa May, David Davis and Boris Johnson all avoided repeating their election slogan that ‘no deal is better than a bad deal’; whilst David Davis confirmed that Whitehall was making plans for a ‘no deal Brexit’ as a contingency preparation.

The ultimate outcome of the Brexit negotiations remains unpredictable and it is still 50/50 whether we will have a chaotic ‘no deal’ Brexit or an orderly, planned Brexit.  For now it looks unlikely that the Brexit negotiations will reach agreement on the divorce elements (settling the Bill, rights of citizens and Northern Ireland) in time to move on to the next stage of discussions (on the UK’s future trading relationship with the EU) before the end of the year.

3.The State of Capitalism

One hundred and fifty years after the publication of Das Kapital, politics once again seems to be debating the nature of capitalism versus state management of the economy.  At the Labour conference Jeremy Corbyn and his shadow chancellor John McDonnell talked about public management of the economy, rent controls, bringing PFI contracts (private finance for public infrastructure) back into the public sector, and nationalisation of trains, Royal Mail and utilities.  At the Conservative conference the Prime Minister and the Chancellor Philip Hammond responded with a defence of the free market.

A recent study by the Legatum Institute shows that nationalisation, pay caps for CEOs and higher levels of regulation are now supported by the majority of the British population.  The profound technological and demographic changes taking place in our economy and society, combined with the reverberations of the financial crash ten years ago, are creating a wide belief that the economic model of the last 30 years is no longer working for many people. Jeremy Corbyn’s populism taps into this.

Theresa May has been taking steps to respond to this, with announcements at conference on an energy price cap, a new council house building programme, regulation of the private rented housing sector (compulsory ombudsman scheme, regulation of letting agencies, and a new housing court to speed up compliant handling) as well as new incentives (in November Budget) for landlords to offer longer term leases.

Over the next few months we will also see the government publish new regulations to implement their reforms on executive pay (requiring listed firms to publish the ratio between CEO pay and rest of workforce), board engagement with wider stakeholders and governance in privately owned firms.  There is therefore a move to greater regulation of business and individual sectors, to address wider social benefits.  The measures being introduced by the government this autumn may not go far enough for many and may be further amended in Parliament; whatever happens they demonstrate the current direction of travel in regulation the business environment.

In the short term...

MPs return to Parliament next week and we will start seeing the build up to the Chancellor’s Budget on 22 November as well as the ongoing Eurostar diplomacy of Brexit negotiations.   We will see how these themes unfold over the autumn:  political volatility and inertia; Brexit; and market regulation.

Over the longer term we may start to see a new shape to politics and social and economic policies.  Brexit and the 4th industrial revolution are reshaping out political and economic models as radically as the Corn Law debate and the first industrial revolution transformed 19th century politics and government.  For now the outcome is not clear, and the party conferences perhaps revealed a phenomena that Gramsci described as: “The crisis exists in the fact that the old is dying and the new cannot be born”.

MPs return to Parliament next week and we will start seeing the build up to the Chancellor’s Budget on 22 November as well as the ongoing Eurostar diplomacy of Brexit negotiations. We will see how these themes unfold over the autumn: political volatility and inertia; Brexit; and market regulation. 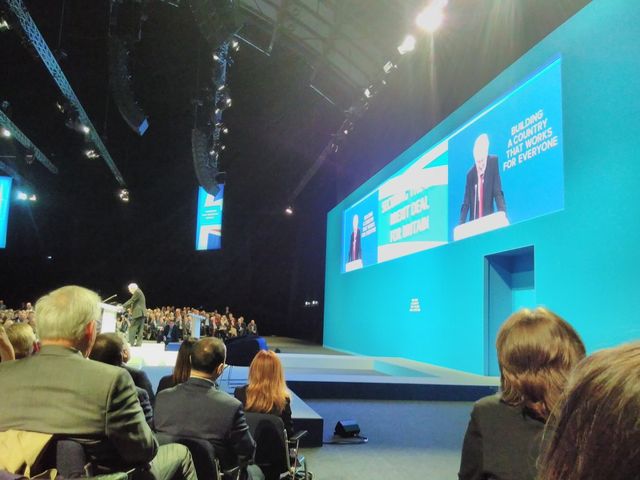