Over the last year or more business have been developing and activating contingency plans to ensure business continuity and compliance in the event of a no-deal Brexit on 29 March and then 12 April.  With the Brexit deadline now extended to 31 October, what should busineses do?

How and when could no-deal happen?

Let’s start with the facts.

A no-deal Brexit remains possible under a couple of scenarios:

1.    EU leaders have set a condition that if the UK fails to hold European Parliament elections on 23 May (and if the UK fails to ratify the withdrawal agreement before then), the UK will leave the EU on a no-deal basis on 1 June.

2.    If we reach 31 October and the UK has still not agreed a deal, no-deal could happen if (a) the UK does not request a further extension of article 50 (another delay) or (b) one or more members of the EU turn down a UK request to extend article 50.

Note that if we get past 1 June, the UK remains a member of the EU, under EU law, until 31 October.

What are the odds?

1.    Is no-deal on 1 June a real possibility?  I would rate it at a 5% probability at best – as things stand.  The UK government has set in train European parliament elections.  Ministers have confirmed that the UK will hold European parliament elections on 23 May unless a deal is ratified before then.  Given only 180 MPs voted against or abstained on extending article 50 this week, we can be pretty confident that there is a two thirds majority in parliament against cancelling European elections.

2.    A no-deal on 31 October is a higher probability.  This week’s Brexit delay did nothing to change the fact that MPs have failed to agree on any kind of deal over the last five months. Against that, EU leaders were keen to avoid a no-deal this week; and there is a majority of MPs against no-deal. But who knows what situation we may be in come October, after European elections, a possible change of Conservative leader and even a general election?

Bear in mind we came within 48 hours of a no-deal this week; the current Prime Minster only became convinced that no-deal should be avoided at all costs last week; and four cabinet ministers did not vote in favour of extending article 50 this week. The volatility of the situation means that no-deal on 31 October should be treated as a real possibility.

What has the UK government said?

Government has stood down its ‘high alert’ no-deal crisis teams and plans (put in place for the possibility of no-deal today).   But no-deal planning continues.  EU exit Minister James Cleverly has confirmed that “imminent no-deal Brexit planning” in Government has been stood down, because we have averted no-deal this week, and that “ongoing no-deal preparation” continues.

I heard a senior cabinet minister tell businesses in the last 24 hours: “We still have uncertainty…  The risk is low, but the risk can never be discounted”.   The minister confirmed that government is still recommending business should still prepare contingency plans for no-deal and civil servants are still doing so.  He added: “It is prudent to continue; food and retail will run down stocks and will then need to run up stocks again [for 31 October].  It is prudent to prepare for any eventuality.  In government we continue to do so.”

What does this mean for your no-deal contingency plans?

For some businesses, who needed to relocate operations and secure regulatory approvals in good time before a no-deal, this will be a more academic question.  If no-deal planning has already been activated and implemented, it is now a matter of looking at how to develop that operational model and assess longer term strategies in the event of a deal as well as no-deal materialising.

For businesses who ramped up no-deal preparations (eg stockpiling for no-deal or delaying projects or orders over the initial period of potential disruption), you can stand down your ‘code red’ status.

For 1 June:  The probability of no-deal on 1 June is so low that you can discount it for planning purposes.   But remember we live in volatile times.  Identify what the triggers are for reactivating no-deal plans for 1 June:  these will depend upon your lead times, but tell tale signs would be if the Prime Minister gives any indication of considering no-deal or abandoning European elections or if we see a growing number of MPs calling for European elections to be scrapped.  And monitor the situation – you should schedule a very regular check-in to re-assess the risks.

This is what many of our clients are doing – for now, scale back stockpiling in an orderly way but keep an ongoing review of any change in political risk levels.

For 31 October:  businesses should maintain planning for 31 October.  Now is a good time to:

-        Review lessons learnt and make any adjustments to your plan

-        Document your plan and identify roles, so it is easy to pick up again and it is resilient to any personnel changes

-        Use the time to implement ‘no regret’ decisions which improve efficiency and ensure compliance or reduced costs in any Brexit scenario.

-        Continue to work with your supply chain – more time provides more opportunity to develop integrated plans – increasing the efficiency and effectiveness of supply chain plans (how do you avoid duplication? How can you ensure there are no weak links?)

Imminent no-deal Brexit crisis planning in Government has been stood down, because we have averted no-deal this week, but “ongoing no-deal preparation” continues. It is prudent to prepare for any eventuality. Government continues to do so. 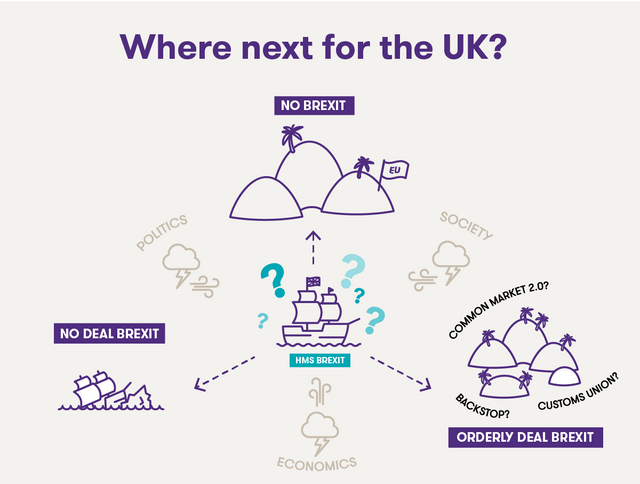