Like me, you may have enjoyed a brief respite from Brexit over the Easter holidays, following the agreement with the EU to extend the Brexit deadline to 31 October. Whilst things have seemed quiet on the political front, here are five things that have been going on over the last two weeks that will shape the next year.

1. Talks between the Government and Labour party: deal or no deal?

There have been ongoing negotiations between the government and the Labour opposition to see if they can agree a Brexit compromise that will secure a decent majority in Parliament. Progress reports from these talks have been blowing hot and cold. They looked likely to collapse and then there were signs that a compromise based on agreement to a customs union might be reached. We should know next week:  the Prime Minister has indicated that they need to wrap up one way or another by the middle of the week (8 May). How they respond to this week’s local elections will be critical…

2. Local election results: a challenge to Theresa May and Jeremy Corbyn

This week’s local elections for English councils saw heavy losses for the Conservative Party as expected but also losses for the Labour party. Voters turned away from the main parties, with gains for the Liberal Democrats, Greens and a host of independents. Whilst local issues played a part in some places, these results show that Brexit is hurting both main political parties; the Conservatives have lost ‘remain’ voters and ‘leavers’ who are angry that Brexit has been delayed; and the Labour party’s ambiguous position on Brexit also seems to have lost them ‘leave’ and ‘remain’ voters.

This creates a dilemma for both Prime Minister Theresa May and Opposition leader Jeremy Corbyn: do they agree a Labour-Conservative deal on Brexit in order to move on; or does such a deal risk destroying both their parties in parliament as many of their own MPs on both sides will view such a compromise as a betrayal? It is hard to know if both leaders will be prepared to make the decisive move or if the risks to both mean they will continue to fudge things for now. As things stand, the Labour leadership may decide they have more to gain by holding off until after the European Parliament elections on 23 May.

3. The race to be the new Conservative leader has already started

A large field of Conservative ministers and MPs is already engaged in wooing the votes of MPs and party members in anticipation of a contest to replace Theresa May. The circumstances surrounding the sacking of the defence secretary Gavin Williamson this week, for leaking details of a cabinet discussion on national security, were rooted in manoeuvrings for the leadership contest.

Many leading candidates have been tacking towards a hard Brexit and we can expect the party membership to pick a hard Brexit leader. Leading candidate Boris Johnson has made clear that a no deal Brexit would be his preference. For these reasons, no-deal on 31 October is a strong possibility.

Expect a Conservative party leadership contest this summer to replace the Prime Minister. Whilst the local election defeats may not be the final nail in the coffin for Theresa May’s premiership, a dismal showing in the European Parliament elections may be seized upon by Conservative MPs to force the resignation of Theresa May as Prime Minister.

4. The European Parliament elections may usher in greater political volatility in the UK and Europe

European elections are underway, with voting in the UK on 23 May and results on 26 May. In the UK we can expect a very strong showing by Nigel Farage’s Brexit party, increasing the pressure for the UK government to take a harder line on Brexit. These elections may be the political storm that blows the Brexit process out of its current doldrums and send us towards a final Brexit destination.

Elsewhere in Europe, we may see an increase in extremist parties winning seats. The centre right may retain power in the European Parliament, but the EU will be more focused on addressing the rise of extremism and Brexit will increasingly be a distraction to this. These elections also matter because the European Parliament has a big role in picking the new President of the European Commission to replace Juncker this autumn, which in turn affects the direction and pace of European policy over the next four years.

5. Extinction rebellion: another rejection of conventional politics and a harbinger of more regulatory action on climate change

For 10 days the streets of London were taken over by the Extinction Rebellion climate change protests. This is a sign of things to come:

What may have seemed a quiet fortnight has actually been fermenting political change. On Brexit, we are currently stuck in the ‘doldrums’ of parliamentary indecision, but at some point soon a storm will blow the UK towards one of three outcomes:  no-deal, a deal with the EU, or no Brexit. The European parliament elections and a change of Conservative leader may be the catalyst for this.

Here is the timeline for what may happen next on Brexit: 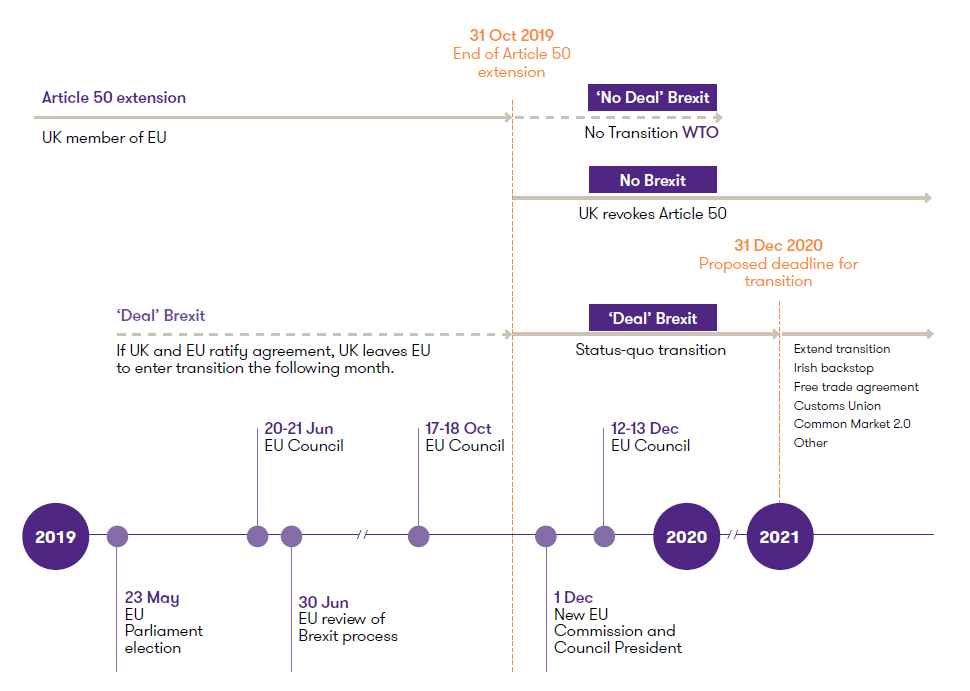 This takes place against the collapse of trust in established political parties and institutions (a global phenomenon,  in the EU and USA as well as UK) which will create huge political volatility and change and an unstable business environment. In the UK we can expect a new Prime Minster and a general election in the next year, which together with Brexit may usher in wholesale change in tax, public spending, regulation and international relations.

For business and other organisations this means:

1.  Get used to political volatility. Across the globe we are seeing volatile, unpredictable politics and established norms overturned. This is a big factor in the business environment for every organisation. Business can not ignore politics – they need to anticipate change and be prepared. Identify how political change may affect your business, through scenario planning to identify risks and opportunities. Be prepared by developing contingency plans and strategies and operations that create agility and resilience. And keep politics under review, maintaining horizon scanning and monitoring the triggers for you to act.

2. Be prepared for a no-deal Brexit on 31 October.  In terms of Brexit, no-deal remains possible on 31 October and the chances of no-deal then are higher than they were in the run up to the initial Brexit deadline of 31 March. If you haven’t got a contingency plan for no-deal Brexit, use this time to develop one (see our guide here). And if you had a no-deal plan for March, keep it updated and make sure you know what you need to do and when to escalate preparations. Here are some tips on: updating existing Brexit plans and stockpiling.

You can take a few weeks break from Brexit for now, but do not leave it to after the summer break. October will be here sooner than you think!

What may have seemed a quiet fortnight has actually been fermenting political change. On Brexit, we are currently stuck in the ‘doldrums’ of parliamentary indecision, but at some point soon a storm will blow the UK towards one of three outcomes: no-deal, a deal with the EU, or no Brexit. The European parliament elections and a change of Conservative leader may be the catalyst for this. 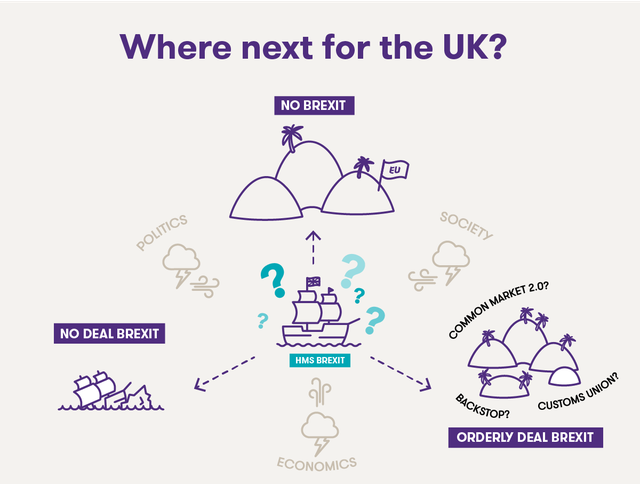