A no-deal Brexit could lead MPs to bring down the government and bring on an election or even vote to stop Brexit (and revoke article 50); an extension may only be agreed by the EU if the UK proposes a second referendum.

So the autumn is a highly uncertain time. We may have a no-deal Brexit (a strong possibility as things stand), a deal, a further extension or even no Brexit.  Any of these could be accompanied by an election or a second Brexit referendum.

Whatever happens on 31 October, business needs to plan for the aftermath as well as preparing for the immediate impact of a deal or no-deal Brexit.  Here are three things to prepare for after 31 October, regardless of the Brexit outcome.

More political uncertainty:    Brexit is stuck because there is no consensus view in the UK parliament on how it should be resolved.  Two ways out of this conundrum are to hold an election (which may be necessary if Brexit also means no political leader can command a majority of MPs) or a second referendum.  Either of these options is possible in the autumn or early 2020.  It is impossible to predict the outcome of an election or a second EU referendum. A second referendum on Scottish independence is also increasing in likelihood, fuelled by Brexit.   Increasingly we are working with clients to help assess possible election outcomes - looking at different scenarios and what policies might be pursued.

New business policies:  An election could have a big impact on the UK business environment – with radically different government policies possible on tax, regulation, trade, infrastructure investment and public services.  These are all areas that will change regardless of an election, as Brexit means new UK approaches will need to be developed to replace EU programmes and trade deals and to respond to the wider economic impact.

There will also be change in July when the new Prime Minister takes over and appoints new ministers. Whitehall civil servants are already referring to the 'next administration' and planning for a Johnson or Hunt government in much the same way they plan for new governments during a general election .

Mapping the risks and opportunities helps organisations to navigate an uncertain future.

Brexit has divided the country at a time when political debate is becoming less civil.  During local elections there were reports of increased levels of abuse against candidates, more milkshakes and punches than usual were thrown during the European election and social media abuse is causing increased concern.  More generally, large corporates, politicians, journalists and even charities face a decline in levels of public trust. Whether or not this breaks down into disruptive social disorder, this create challenges as an employer and in serving customers. Understanding the mood of the nation is increasingly important.

Brexit is part of a wider social and economic and political upheaval in the UK and globally. This creates new challenges for business. Uncertainty is already shaping the business environment. Keep market conditions and your supply chain under review.

Looking towards 31 October no-deal Brexit is increasingly likely and may also be more challenging than a no-deal earlier this year.  Now is the time to prepare for this.

Beyond this, we can expect significant political change.  Agility is key:  reduce cost and increase flexibility in your operations, identify key risks and opportunities, monitor developments, and create a culture and governance that enables rapid decision making. And more than ever, factor political risk into your operational and strategic planning.

Increasingly businesses are thinking about what the ​next Prime Minister may focus on and scenario planning a p​ossible election. 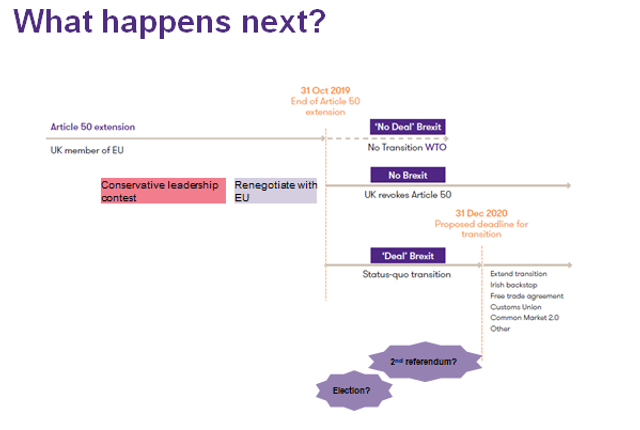