Last week I had the privilege of hosting a British American Business roundtable which brought together US and U.K. businesses and a party of trade advisers from the US Congress, including the lead Democrat and Republican congressional Trade Counsels. The high-level visit from the US and the views expressed by the US and UK businesses round the table all showed a strong appetite for a comprehensive US-UK trade deal.

As a Brit married to an American I have a keen interest in this one and firmly believe in Anglo-American partnerships! So what are the prospects for a deal?  What are the big issues?  What are the chances of an agreement – and how soon?

What could a trade deal cover?

Benefits were identified for the automotive industry in the US and UK – again as much from agreeing ways of recognising technical standards as from reducing tariffs.

What are the issues and potential roadblocks?

We may see the UK trying to agree a ‘bare bones’ ‘backward looking’ trade deal with the EU – maintaining existing standards in manufactured goods and foods but allowing freedom to take a different approach in new and emerging technologies – and a more ’forward looking’ trade deal with the US, focusing on areas like bio-tech, AI, digital trade and data.

How likely is a deal? And how quick?

Barriers are significant but not insurmountable: The issue of Digital Services Tax may ultimately be resolved via the OECD, which is looking at a multilateral approach.  An OECD agreement on Digital Services Tax would enable the UK and US to move on. This will take time – the UK Chancellor is likely to confirm the Uk is moving ahead with the Digital Services Tax in the forthcoming Budget. Squaring the circle on agricultural standards with an EU trade deal may be harder, but there may be a little wriggle room, perhaps with commitments to increase US food access over time and find one or two areas which are compatible with an EU deal.  Huawei, and the approach to Chinese involvement in digital infrastructure, looks a more intractable problem right now and is undoubtedly holding up the start of negotiations.

Nothing will be finalised this year: The Uk is expected to publish its negotiating objectives for a US trade deal in the coming weeks (the US published theirs a year ago:  https://ustr.gov/sites/default/files/Summary_of_U.S.-UK_Negotiating_Objectives.pdf ).  There may be mutual self-interest on both sides in making initial progress:  President Trump to make progress in the run up to the November elections; and Boris Johnson to put pressure on the EU in the final stages of EU-UK negotiations.   But even if the obstacles are overcome, a deal will not be formally agreed this year.

It will very much depend upon the results of the US elections (including the results in Congress).  The text of a trade agreement can often be agreed quite quickly; the things that takes a long time is its ratification by the political system.  Whilst Boris Johnson’s big majority in the House of Commons may make this relatively easy on the Uk side, there will be plenty of political, media and public debate and in the US, Congress can make or break trade deals.  It is even possible that the EU will agree a trade deal with the US before the UK does.

And that perhaps is the biggest risk for the UK. Outside the EU, it is now at the mercy of the three big global trade blocks:  the EU, USA and China.  At a time of increasing protectionism and trade wars and with a weakened WTO. The UK may be able to broker deals with each side – but it may also be crushed between these three trade powers.

There is definite interest on all sides and potential business benefits, but this will not be plain sailing and business should be prepared to voice their views on benefits and risks over the coming year.

We may see the UK trying to agree a ‘bare bones’ ‘backward looking’ trade deal with the EU – maintaining existing standards in manufactured goods and foods but allowing freedom to take a different approach in new and emerging technologies – and a more ’forward looking’ trade deal with the US, focusing on areas like bio-tech, AI, digital trade and data. 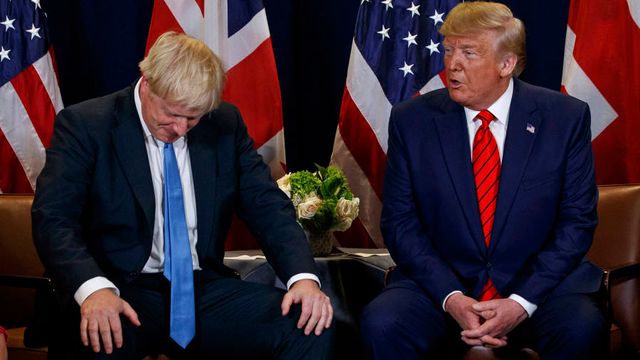