Next week Rishi Sunak, appointed Chancellor less than a month ago, will set out his first Budget. This will also be Boris Johnson’s first Budget, the first full spending and tax statement since he became Prime Minister in July 2019 and the first Budget under his new arrangements whereby 10 Downing Street and the Treasury have a shared set of advisers, with his chief of staff Dominic Cummings allegedly writing large chunks of the Budget.

This should be the most significant Budget since George Osborne’s first Budget ten years ago;  it should start to provide some clarity on what Brexit Britain looks like: the patterns of tax and spending, and what these means for the business environment and international investment, public services, communities across the UK and individual workers and savers.

In practice it may now be overshadowed by Coronavirus: government contingency plans and the economic impact. Just as Brexit has made recent budgets ‘placeholders’ during a time of uncertainty, so next week’s Budget may pull its punches on some of the big policy and fiscal changes, to enable government, business and the wider economy to focus on the increasing risk of a global pandemic.

It is increasingly likely that we may see a stripped back Budget that focuses on two things:

1.      Responding to Coronavirus, budgeting for increased spend including: a spike in welfare and benefits payments arising from illness and the economic impact, support for otherwise viable businesses, civil contingency plans, and health and social care.

Here are some of the things to look out for, whether as clear direction of government policy or issues that are delayed again until the autumn Budget.

In terms of Brexit, over recent years the OBR has said that it has ‘no meaningful’ basis for predicting the long term UK-EU relationship and the economic impact of this; will the clearer direction of travel from the government and the recently published immigration policy enable a firmer economic forecast for the impact of Breixt in 2020 onwards? And whereas past OBR forecasts have been based on a government declared aim of ‘friction free trade’ now the Government is explicit in stating there will be friction in January 2020, will the IBR revise down their economic forecasts?

The global economy has already seen an impact from the US-China tariff wars. With the OECD warning that Coronavirus represents the biggest risks to the global economy since the 2008 financial crisis (and with a best case scenario of 0.5% fall in global GDP and a longer lasting and more intensive outbreak halving forecast global growth in 2020), how will this affect the Chancellor’s economic forecasting and tax revenue?  And what will it mean for public spending, particularly on health, civil contingency and economic stimulus.

The truth is that the Treasury and OBR simply won’t be able to predict this known unknown – and this may well mean that this is an interim Budget, pending further clarity on the scale of Coronavirus.

George Osborne’s main fiscal rule was to eliminate the deficit (i.e. the imbalance between spend and revenue) by 2019/20. Philip Hammond extended the target date to 2025 at the latest. Both also had targets for reducing borrowing.  In the election Sajid Javid set out new fiscal rules: to balance the current budget within three years (i.e. ‘running cost’ expenditure not total spending) and for no additional borrowing to pay for current spending; this took capital investment (e.g. in infrastructure) out of the equation for balancing the budget and for borrowing. Sajid Javid also set a new rule to limit net investment to 3% of GDP.

There is speculation that Rishi Sunak may propose further revisions to the fiscal rules, including the possibility of reclassifying some current expenditure on health and education as capital investment in productivity (human capital); markets will be watching to see how much this relaxes borrowing and debt and how much scope for additional capital investment it allows.

The first Budget after an election always increases tax overall – this is the point in an electoral cycle where government can risk tax rises, to create headway for tax reductions towards the next election. So, what will be taxed?  The Government has committed not to raise income tax, NIC or VAT and has already signalled that it will hold Corporation tax at 19%. We expect tax rises on wealth and capital gains:  Entrepreneurs Relief on capital gains tax is likely to abolished; the Conservative manifesto during the election indicated as much. There could be changes to other tax relief, such as inheritance tax relief on business premises and agricultural land; these are areas to look out for.

For businesses, we should see the launch of a major review of business rates (also of interest to local authorities); additional tax avoidance and transparency measures; and confirmation of IR35 going ahead (with the ‘light touch’ implementation concessions made by governement recently).   The Chancellor is expected to also confirm that the Digital Services Tax will come into force in April  (tee-ing this up as an issue of contention in US-UK trade deal negotiations, but possibly solved in due course through an OECD agreement).

For employers, the Conservative election pledge of raising the employee NI threshold to £9,500 in 2020 will be implemented.  Look out for any further measures aimed ta heloing lower paid workers as part of the ‘levelling up’ agenda.

There is an expectation that this budget will increase spending.  The Government has already set out proposals for increasing spend on health, transport and police.  We expect to see additional investment in infrastructure (more at the shovel ready end of projects), science and probably skills and training. As noted above, expect the big increases to be in capital (or whatever is reclassified as capital).  There will also be some cuts: Ministers have been asked to identify savings.  The winners and losers will start to give a sense of priorities and the direction of travel for the big spending review due in the autumn (which will set out spending plans for the next five years). The geographic distribution will be significant, as the government has said it will change the Treasury’s ‘green book’ rules on approving spending projects, to give increased weighting to ‘levelling up’ regional economic imbalances.

The Budget will implement the delivery of election commitments on increased spend on the NHS and schools. Will it go further and look at the wider pressures on local government including social care? Faced with a funding gap across local government and increased pressure to raise council taxes, in September the government announced additional funding for the next year; the first real terms increase in government grants for local authorities in over a decade.  Will budget 2020 build on this or will the other priority areas for the Government hog the limelight?

Successive Chancellors and economists have sought to tackle the UK’s productivity gap, which has widened since the 2008 financial crisis.  Expect actions around policy, tax and spend to seek to narrow the UK’s productivity gap with other countries and within the UK. Sajid Javid was planning to focus on skills investement, alongside infrastructure and potentially in addition to the Conservative manifesto commitment to a £600m a year National Skills Fund from 2021.

In terms of infrastructure, as well as funding, organisations will be looking for any further detail on implementation and delivery models and the publication of a National Infrastructure Strategy.

R&D tax credit will be increased by 1%, as promised in the Conservative election manifesto, and a review of R&D incentives is likely to be published at the same time, looking at wider measures to support innovation and extend the R&D credits.  There may also be plans to set up an UK equivalent of the US Defence Advanced Research Projects Agency (DARPA) for science research.

The Budget will rightly be scrutinized for its impact on carbon reduction, with the UK parliament having declared a climate emergency, the UK’s legal commitment to be carbon neutral by 2050 at the latest, and a new round of climate change talks (COP 26) hosted by the UK this autumn.  Will the Chancellor (as hinted) end the freeze on fuel duty, will other tax measures incentivise the shift to a zero-carbon economy and promote ‘green investment’ by pension funds and savers, and how much infrastructure investment will be focused on decarbonisation?

What does this all add up to?

This may look very different to any Budget previously presented by a Conservative government:  with significantly increased spending and tax on the wealthy. Taken together, the different parts of this Budget should (subject to some measures being delayed due to Coronavirus uncertainty) start to set out a vision for the future UK economy. As the UK moves away from a European economic model, will this shift to ‘Singapore on Thames’?

Downing Street is increasingly setting out elements of a “Silicon Britain” vision of a high skilled, science and technology-based economy, supported by a ‘nurturing’ approach to regulation in new technology, investment in science and skills and tax incentives for innovation. This is inter-twined with an objective of ‘levelling up’ the economies of different parts of the UK, particularly strengthening the economy of towns and the Midlands and North of England. This will start to shape the role of the UK in the global economy, the position of the City of London, and which sectors and regions restructure and thrive.

Next week we will know which parts of this picture have become clearer and which remain uncertain.

For more analysis, I’ll be unpacking the Budget with Grant Thornton tax experts in our post-Budget webinar on 17 March; you can sign up here: Grant Thornton webinar Budget 2020

This should be the most significant Budget since George Osborne’s first Budget ten years ago; it should start to provide some clarity on what Brexit Britain looks like: the patterns of tax and spending, and what these means for the business environment and international investment, public services, communities across the UK and individual workers and savers. In practice it may now be overshadowed by Coronavirus: government contingency plans and the economic impact. 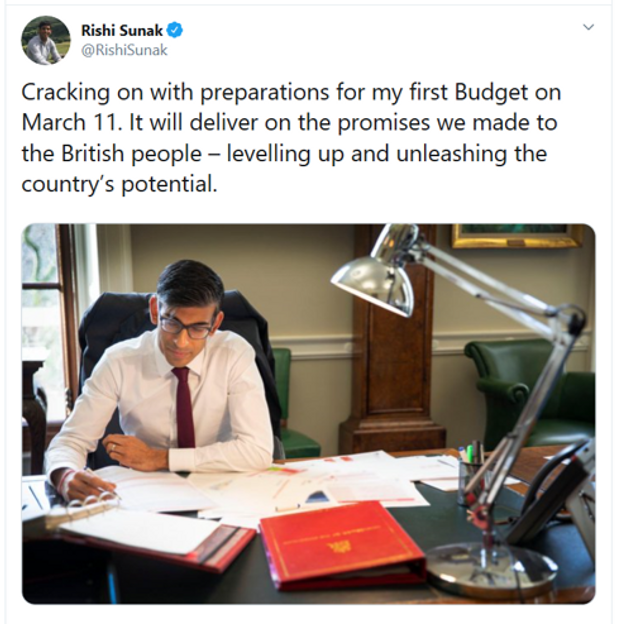